Brexit appeared in the foggy horizon of the European path, after the concerns for a Euro meltdown or the strong efforts (and high social costs) to avoid a Grexit.

No mystery that the euro-enthusiasm has always been far away the British shores, since the EU join in 1973 after a deep evaluation of costs and benefits. Feelings about costs and benefit that have already deeply mutated, with growing pressure on top MPs and cabinet members to let the Britons vote in a EU referendum whether break up or not.

The Economist issued last week a meaningful cover, with a focus on the possible costs and benefits of a sudden Brexit. A structured analysis on the different possible scenarios for the following months, considering the ongoing European negotiations on crucial issues and the growing pressure of euro-skepticism (UKIP increasing success, for example). 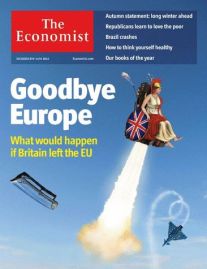 Meanwhile Ed Milibrand, leader of the opposition, claims Mr. Cameron and the Tories are drifting towards the Brexit, just minutes after the report at the House of Commons on the seventh European Council summit held in Brussels, where the PM obtained several safeguards on the planned banking union, especially regarding an explicit clause in the agreements that says no action by the European Central Bank should directly or indirectly discriminate against those countries outside of banking union or the single currency.

But the public opinion pressure will play a more important role soon: the 2011 European Act dictates that a referendum must be held on any new EU treaty that shifts powers from Westminster to Brussels. A treaty change very clear at the horizon in 2015 or 2016, that will be at the top of Mr. Cameron agenda (if re-elected, of course). But the call for an earlier referendum from the public opinion could also become irresistible, as many of the recent polls show (see graph below).

The benefits of Brexit for Britain are mainly short-term sized:

But the immediate gain would soon be followed by the high costs of such a drastic choice:

Also financial benefits are not so sure: The Economist mentions a study by TheCityUK showing interesting results on 147 siting choices from 2006 to 2012:

It found that more than two-fifths of finance firms gave access to European markets as a core reason for choosing London. Although the single market in financial services is still a work in progress, “passporting rights” entitle investment firms, banks and insurers based in Britain to establish branches or provide services throughout the EEA.

A positive attitude on the EU future cannot be limited to a simple costs/benefits analysis. The growing debate on Brexit should warn European leaders: crucial issues as legitimation and sovereignty are not less important than the financial balance or the fiscal/monetary policies. The legitimation crisis shaking EU institutions it’s a chance that cannot be missed.

It’s time to raise our joint bet, otherwise there won’t be any top player seat at the global green table. For any European country, UK included.