Over 80% of people living in urban areas where an air pollution monitoring system is available, is daily exposed to polluting chemicals in values the temperature esce WHO limits. These limits are broken regularly with over increased values in emerging countries and in low income urban areas. Just have a look at the chart below to spot how Beijing recorded Pmi levels quote above the acceptable values last year and you’ll have a quite good benchmark.

According to the latest WHO commentaries, over 98% of low income cities in the world with over 100.000 inhabitants are exceeding the air pollution guidelines compared with the 56% of the higher income cities which is still an impressive share. If we consider that within the next 30 years over two thirds of the global population will live in urban areas and huge metropolitan cities, we can expect a Philip Dick novel society sooner than we would hope. Without going deep into the details, one of the best ways to contain air pollution in wide urban areas is to plant tree.

There are lot of examples of sharing ecology initiatives around the world, with urban gardening events, or dismissed urban areas converted to parks like the NYC high line park we can admire, which are also a quite good opportunity to improve citizens social life and participation. Technology is helping us to find easier ways to integrate these initiatives or to intervene while waiting our municipalities to implement a decent green area plan. City Tree is an urban mobile installation which has been already positioned in several capitals of the world like Oslo, Paris, Bruxelles, and even Hong Kong recently. It’s a project developed by the German startup GreenCity Solutions.

Basically it’s a white cube 4 meters tall and 3 meters large with a 2.5 meters depth, which could have also a nice bench at the bottom. There’s also a screen displaying information about the air pollution filtering performance or advertising. It’s a moss colture with a nice green outfit. Moss colture offer a better green leaves surface compared to other plants. A single cube could be compared to the assorbono performance of 120 trees which means you can easily save space and avoid to tackle complicated red tape or urban planning issues. Every single City Tree absorbs several varieties of air pollutants like nitrogen dioxide and ozone gases that are among the most dangerous pollutants commonly active on urban areas. It needs little maintenance: it’s powered by solar panels and collects rain water in a self managed tank, while a software and few sensors decide when it’s the right time to water the moss colture. It records permanent data on air quality and absorption performance while it can easily be connected to other monitoring device or put in a network of similar cubes. The overall estimated particulate absorbed is about 250 grams per day and 240 Mt tons of CO2 a year which is basically a performance close to a small tree park in the city. It costs about 25000 dollars according to CNN but the benefits are relevant. Many are still dubious: CNN interviewed several experts which point about that several urban pollutants are dispersed vertically (think about the car exhaust for example) and that it could be better avoid the gas to be form at first. That said, we could also argue that a device like this cube could be a way to integrate a wider plan with multiple solutions to tackle air pollution problems. We plant trees, build parks, implement green policies, incentivate mass transit improving services, and position several high tech devices like this one where they work better.

Technology will save us (or try to at least) 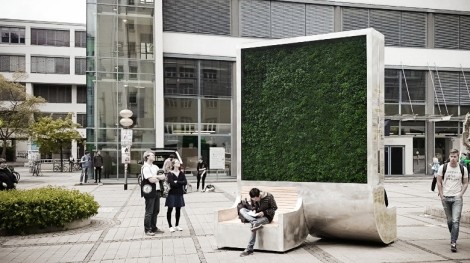