Last weekend, the Maker Faire Europe in Rome, offered a further more glance at the innovation ecosystem in Europe and Italy. Makers and more: startups, university spin-offs, established companies and major ones that are active in the top focus areas of this year’s edition: aerospace, robotics, electronics, circular economy, design and lifestyle, future food and much more. This year, in addition to the one hundred thousand registered presence in three days (many families, children, students, but also many enthusiasts, entrepreneurs and professionals in the industry), we had the opportunity to get into the 700 selected projects coming from 61 different countries. A wide range offer of exhibitors supported intensively by ICE – Italian Trade Agency with nearly two hundred foreign professionals selected from VC funds, business angels, investors and international players interested in betting on innovation. Here are three very interesting trends that emerged IMHO in this year’s edition:

An entire pavilion dedicated to the circular economy where not only giants such as ENI have presented cutting-edge technologies (recovering combustible material from the oil used for frying, with a circular restaurant at the fair for a live test), or European projects such as StarProBio aiming at the concrete development of bio-based products, but also much more. Many players who produce products and technologies protagonists of the circular economy, even immediately expendable on commodity and daily-life goods. One example is WisePower which produces proprietary technologies to recover energy from vibrations in order to avoid batteries, cables and electronics in small objects and wearables (razors, toothbrushes, and much more) with an extremely wide range of application.

A simplified model of the circular economy of materials and energy according to the European Union, which is focusing a lot on the implementation of technologies and processes able to optimize production  and create new business opportunities

According to Eurostat data Italy is, in Europe, the country that most uses in the production processes the circular raw material, or the second raw material (18.5%), almost doubling its share in the comparison with Germany (10.7%). This new production paradigm is becoming a competitive factor for production systems in the coming years and decades, if we consider that the European Commission estimates the benefits of the circular model about 600 billion euros (8% of turnover) of savings for businesses and the creation of about 580,000 jobs.

Italy is one of the leading countries also in the dashboard of indicators that Eurostat releases to measure the efficiency of resources, and which is one of the strategic papers tracking the progress towards the circular economy of the Union. If we explore the data of the resource productivity the trend is surprising: dividing the gross domestic product for domestic consumption of raw materials, Italy is the fourth country after the Netherlands, UK and Luxembourg in the 28-member Europe, and has a superior performance to other exporting countries and leading transformers such as France or Germany. This important result is due mainly to the growth in the efficiency of the resources, which, however, if we broaden our gaze also to the G7 countries, still shows a strong gap with countries such as the United Kingdom and Japan. In the aggregate data on waste, which remain constant over the last 5 years, the fraction suitable for recycling processes increases, thus increasing the potential to make the Italian economy more and more circular. The data on the secondary raw materials generated starting from the urban separate collection are interesting. Considering paper, wood, glass, plastic and organic, around 10.6 million tons (over 60% as material recovery) were returned to the market.

# 2 – 3D printers: towards a commodity able to revolutionize important sectors

I take an example on all but there are many: a 3D printer can cost even under €500 or 600 USD. Obviously it is not enough just a hardware like that to make a home-based fablab (and we already covered different examples of interesting hubs here and here), but definitely widens the access opportunities.

The applications are important: the live prototyping features that are useful to dentists and many other professions, or the possibility of releasing important potential between the makers and the craftsmanship 4.0 for a do it yourself tide that will reshape the way we think about craftmen.

# 3 – healthcare and wellness: innovations with disruptive effects for everyday life

First of all there is the success story of this year: Clairy and its air purifiers. Presented two years ago at CES in Las Vegas, the most important electronics fair in the world, the company was approached by Plug & Play Ventures, the startup accelerator with investments in Google, Dropbox and PayPal. A smart design device that purifies the air and is totally ecological, is a truly disruptive idea.

The success is huge right away: collecting hundreds of thousands of dollars thanks to micro funding, Clairy has been awarded for design and innovation a bit everywhere, to be financed with two million dollars from the European Commission thanks to the Horizon 2020 programme. In April 2018 NATEDE was released, a brand new product line that presents a new innovative design in biomaterial, that already raised 1 million dollars in a few days. 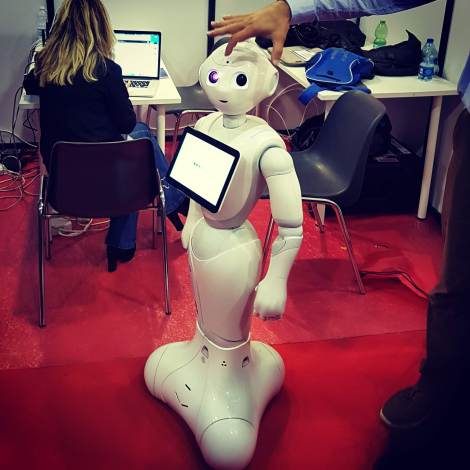 There is also room for robots at Maker Faire 2018, and the one designed by CNR is the most popular of the pavilion. Even when they touch his head and he seems vaguely upset!