Two weeks ago Doug McMillon, CEO of Walmart, acknowledged Walmart delay in the digital retail. Despite multiple attempts to exploit its market position and its widespread presence in the territory, Walmart still has to fill the gap with its competitors. “Obviously bricks-and-mortar stores are one thing. E-commerce in some ways started out feeling like an independent channel or an independent business,” McMillon said. “Yeah, we fell behind and have been playing catch up with you. way and getting better as it relates to the customer experience.“.

And yet results struggle to arrive, given that if we look at Walmart’s penetration in the various market distribution segments in the United States, the digital part is still weak, as the infographic below summarizes.

Walmart’s market penetration in the various US retail channels. Even online sales increased by 40% last year, yet the market share of the American giant is low. Yet the excellent performance in the grocery sector can really make a difference

News confirm that the company is proceeding quickly to reorganize its management to be able to better integrate the Jet.com platform into its digital business. An operation that involves all the strategic divisions of the US giant: from the supply chain team, to operations up to marketing, of course, with different reshuffles and changes at the top for all the functions involved with e-commerce.

Homepage of Jet.com products for the home, fashion, cosmetics, grocery and much more. But still to be integrated with Walmart’s other e-commerce assets

A tough challenge, which seemed uphill from the beginning when in September 2016 Walmart assumed the important risk of acquiring Jet.com for over 3.3 billion dollars: a digital reality certainly growing but also costly in terms of financial commitment and rolling costs for maintaining the digital business. There wasn’t actually a long queue of possible candidates to buy out the company, and Walmart seemed rather hasty in the operation in order to start an attempt to recover on the e-commerce ground with Amazon and the other players. Yet the numbers did not give much wrong at the top of the company, in three years the shares rose by 53% compared to a 38% increase in the S&P 500 index and online sales increased by 40% last year with excellent results in the grocery segment thanks to the appreciated quality of home deliveries and have definitively rebuffed the critics about the company’s digital strategy. 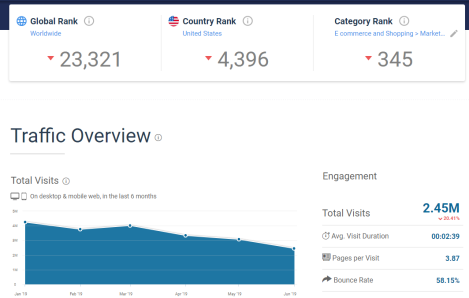 Jet.com traffic according to SimilarWeb

Meanwhile Jet.com faces several challenges that, wanting to have a nerdy approach to the matter, we can also see from the traffic data analyzed with SimilarWeb. However, in a strategic e-commerce market like the United States there is an important effort to be made in terms of customer acquisition cost and competition in a sometimes saturated and expensive advertising market, where the cost per click or investment to get and consolidate traffic can become really challenging.

I wonder if the new set-up at Walmart can give the necessary boost and take advantage of the economies of scale and marketing levers generated by a better (finally) integration between Jet.com and its pre-existing e-commerce assets.

The Jet.com traffic sources: the social and display part is still weak, but the performance in direct traffic and search engines is excellent